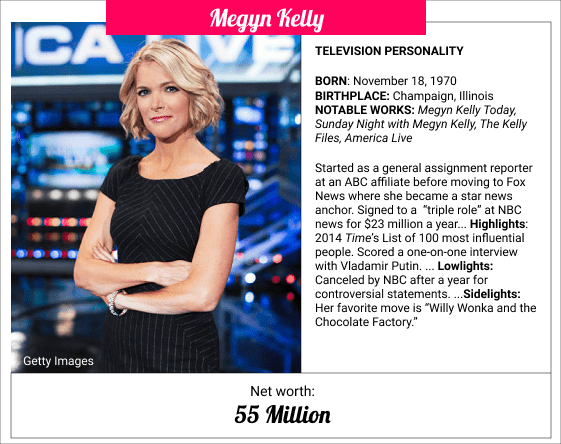 What is Megyn Kelly’s Net Worth? Megyn Kelly is one of the top journalists in the world, working as a television host and political commentator with a net worth of $55 million. Megyn Kelly worked previously as anchor and host at major cable news networks, Fox News and NBC News. After a short stint at NBC that was marred with controversy, Kelly has focused on enhancing her career using her personal social media channels and establishing her own production company.

Check out the below article to know the complete information regarding Megyn Kelly Networth, Her Annual Salary, Books, Other Revenue Streams, Charity, Houses, Cars, Biography, and her other Investment details.

Annual Television Salary: Megyn quickly ascended the ranks at Fox News, and so did her salary, peaking at $8 million per year. Her shows regularly drew two million to three million viewers a night. After 12 years, Fox offered her a new contract worth $20 million a year, but she decided to leave the conservative network for a better deal.

NBC swooped in and signed Megyn to a splashy 3-year, $69 million contracts, coming out to an average salary of $23 million a year. Kelly, though, could not replicate her Fox News magic. Her program, “Megyn Kelly Today,” consistently drew low ratings and was canceled after a year because of a controversial segment discussing blackface. Three months later, Kelly and NBC split, and NBC paid the remaining $30 million left on the contract.

Author: Megyn Kelly’s autobiography Settle for More was published in 2016 by HarperCollins, who reportedly purchased the manuscript for $10 million.

Social Media Platforms: After her split with NBC, Kelly has focused on growing her brand through multiple social media platforms including YouTube and Instagram.

Podcasting and her own production company: In October 2020, Kelly launched a self-funded independent production company, headlined by her podcast, “The Megyn Kelly Show.” The media company, “With Devil May Care Media,” hopes to be an audio content pipeline, independent from corporate and political constraints.

Home: Megyn Kelly lives in a luxury apartment in Manhattan’s Upper West Side with her husband and their three children.

Charitable Causes: Kelly was honored at Variety’s Power of Women Event in 2016 for her involvement with Childhelp, a group that works to prevent child abuse. In 2008, Kelly joined the board of the charity fundraising group Kelly Gang Inc which has raised more than $800,000 since its inception in 2004.

Megyn Marie Kelly was born on November 18, 1970, in Champaign, Illinois. Her mother is Italian German, and her father was Italian. The family eventually relocated to New York, where she has stayed since.

After high school, Kelly attended Syracuse University, graduating with a political science degree. Afterward, she earned a Juris Doctor from Albany Law School in 1995. She would work as an associate at a Chicago law firm for 9 years.

In 2003, Kelly moved to Washington D.C. and worked at an ABC affiliate as a general assignment reporter. Her talent as a legal reporter was undeniable, covering major national and local events, including the 2004 presidential election.

She quickly found a job at Fox News in 2004, appearing on weekly segments for The O’Reilly Factor, Special Report with Brit Hume, and various other programs. In 2020, Kelly was given her own show to host: America Live. Following maternity leave, Kelly premiered her new show, The Kelly Files, which became one of Fox’s most popular shows.

After her contract expired at Fox, NBC hired Kelly and gave her triple roles as a correspondent, host of her own show, Megyn Kelly Today, and host of a special Sunday night program, Sunday Night with Megyn Kelly. She got through half of her 3-year contract, before leaving NBC due to controversial statements she made about blackface.

In 2018, Kelly was criticized for on-air remarks she made on Megyn Kelly Today related to the appropriateness of blackface as part of Halloween costumes. She recollected that “when I was a kid, that was okay as long as you were dressing up as like a character” and defended Luann de Lesseps’s use of skin darkening spray to portray Diana Ross. Although she quickly issued an internal email apologizing for the remarks. NBC canceled Megyn Kelly Today three days later. Kelly was terminated on January 11, 2019, with NBC on the hook for the remainder of the contract.

Kelly was married to Daniel Kendall, an anesthesiologist for five years (2011-2016). In 2008, she married Douglas Brunt, a novelist, and had three children together.

Politically, Kelly identifies as independent, telling Variety that she has voted for both the Democratic and Republican parties in the past.

Although she was not consulted for the film, a movie portraying Kelly’s career at Fox News was released in 2019. In Bombshell, Kelly is played by Charlize Theron, co-starting with other famous, Margot Robbie and Nicole Kidman.

Hope you like this Megyn Kelly Networth article. If you like this, then please share it with your friends… The above post is all about the estimated earnings of Megyn Kelly. Do you have any queries, then feel free to ask via the comment section.

Play the Celebrity Net Worth Game and see if you can guess if they have a higher net worth than Megyn Kelly. Remember to click on the link to see if you’re correct!